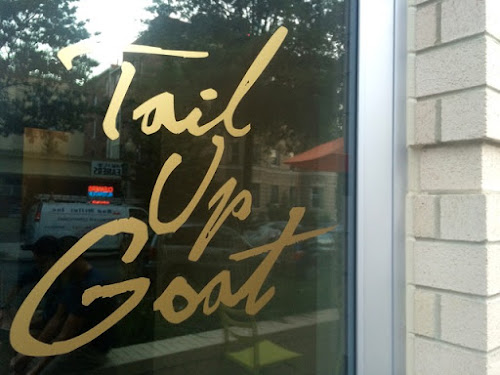 Restaurant accolades are a big deal these days in D.C., where the buzz about our constantly improving restaurant scene just continues to get louder.

Of course the James Beard Awards are the biggest-deal of the big-deal prizes, but another notable indicator, especially of new restaurants, is Bon Appétit magazine's list of the country's best new restaurants. The list was introduced as top-10 in 2009; since its expansion to a top-50 in 2012, D.C. has notched 10 restaurants on the list, including the magazine's #1 pick for 2014, Rose's Luxury.

The only other entry to make the top 10 so far was Little Serow in 2012 (#7), the basement offshoot of acclaimed Greek restaurant Komi. Since opening 5 years ago, the heat of Little Serow's buzz has been matched only by the chilies in its Thai-style dishes.

One of the names on this year's list just happens to be Tail Up Goat, opened earlier this year by three former employees of Komi and Little Serow. Although I've not visited either of those restaurants, I've heard enough good things for me to set fairly high expectations for this new endeavor (also on this year's Bon Appétit list: The Dabney, the Southern-leaning restaurant with the open-hearth kitchen where we enjoyed a very memorable dinner earlier this year).

Unsurprisingly, Tail Up Goat was quite busy when we had dinner there on Saturday. Would the swamped staff still be on top of their game? Would the kitchen rush orders and cut corners? Thankfully, there was no need for concern at Tail Up Goat, where we enjoyed a sensational meal. Sure, it took some time for us to get our drinks, but our server--who was extremely delightful the entire evening--acknowledged this, apologized for it and even comped the drinks, which we didn't expect at all. Nice to see a restaurant that clearly takes keeping its guests happy quite seriously. 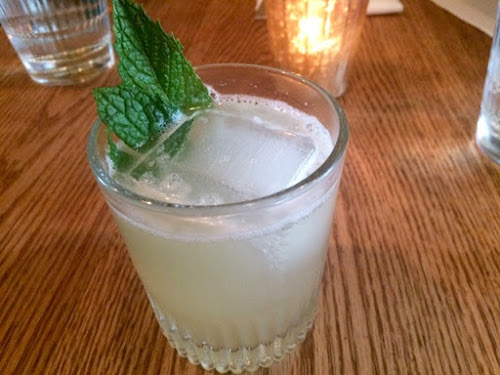 The drinks were worth the wait, and we had something quite different. I opted for a refreshing mix of gin, allspice dram and shrub, while Chris opted for a bracingly strong rum drink flavored made bitter with gunpowder tea. Never heard of shrub? It's a sort of tangy fruit-juice and vinegar mixture from the colonial era that has seen a revival lately, especially in cocktails. As a palette-cleansing starter, Tail Up Goat serves a small short of melon-jalapeño shrub, a refreshing sip with just a hint of spice.

Tail Up Goat's menu is divided into sections that roughly correspond to snacks, breads, small vegetable plates (basically salads), pasta and large plates. We chose one from each category except snacks, which, along with a dessert, was just right for two people. 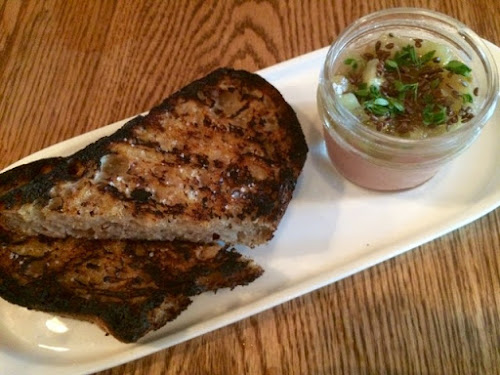 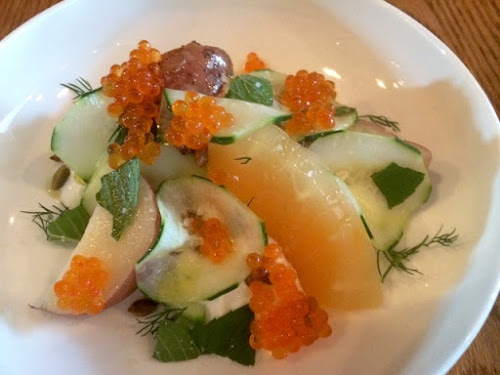 If you're thinking of skipping the bread, don't. It's wonderful. We opted for the red grit sourdough, which was flavorful and perfectly textured, plus it comes grilled, just enough to give it some light toasting but without drying it out. The accompanying liver mousse and green tomato jam is a nice savory-sweet departure from the usual butter. We followed the bread with a fresh summer salad of cucumber, melon, potato and pepitas. I loved the light creamy dressing, and the smoked trout roe provided little salty-briny bursts. 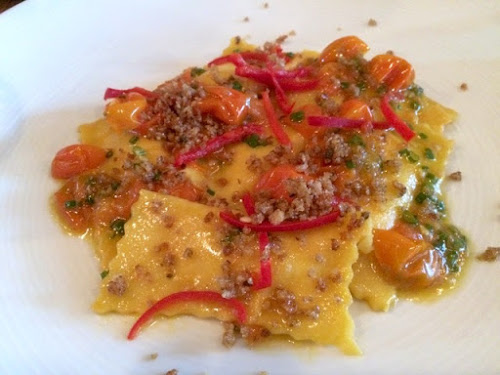 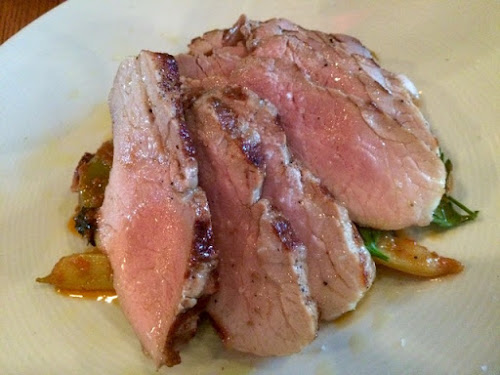 "Summer on a plate" is how our sever described the corn ravioli, bright with the fresh flavors of sweet corn, sungold tomatoes and fresh peppers. Caper-flavored breadcrumbs give the dish a bit of crunch. You know how sometimes the big meat entree you order doesn't live up to everything else that comes before? Not at Tail Up Goat, where the grilled pork, served with romano beans and a pancetta-flecked sauce spiced with espelette peppers, was another highlight of the evening. The pork was amazing, tender and perfectly cooked. Next time we go, I have my eye on a plate of lamb ribs for two; the next table over ordered them, and they looked divine. 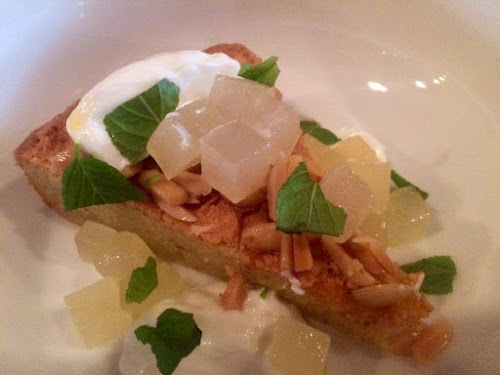 I expected the food at Tail Up Goat to be good, but I was pleasantly surprised by the caliber of its service. Everyone was friendly, including a manager who came by and thanked us for coming. And their excitement about the restaurant seemed genuine. It's nice when a server has clear affection for the food and can really sell the dishes while offering spot-on recommendations. I didn't feel like I was being offered something that that kitchen needed to get rid of, but rather something she really liked. The almond cake she recommended for dessert, for example, was incredibly good, moist, flavorful and dotted with toasted almonds, musk-melon cubes and whipped yogurt. While I know the restaurant is known for its sommelier, it was our server who made the excellent recommendations for what we should drink when we wanted to follow our cocktails with a glass of wine (the sommelier poured the wine, so we benefited from his insight too). If you can't make up your mind what to get, your in good hands here if you just ask for help.

Tail Up Goat more than earned its spot as one of Bon Appétit's 50 best new restaurants list. It was one of the best meals we've had recently in a restaurant--old or new. With excellent food and service that matches, it's a worthy addition to our city's growing roster of high-caliber eating establishments.