Two weeks ago, D.C. lost Michel Richard, one of the city's great chefs. He was best known for two restaurants: his four-star fine-dining Georgetown establishment Citronelle (which closed in 2012), and Central, a more casual downtown bistro known for its burger and fried chicken.


In Richard's memory the week after he died, Bread Furst, our neighborhood bakery, offered Le Kit Kat Bar, Richard's wonderfully decadent no-bake chocolate dessert bar inspired by the Kit Kat Bar. I picked up two and brought then home for Chris and I enjoy to enjoy after dinner. The bars were wonderfully chocolatey and quite rich (I decided to eat only half of mine and save the other half for the next day). They consisted of two layers: a firmer lower layer with a wafering crunch throughout the chocolate and a lighter top layer almost like a firmer version of chocolate mousse. Needless to say, I wanted the recipe. 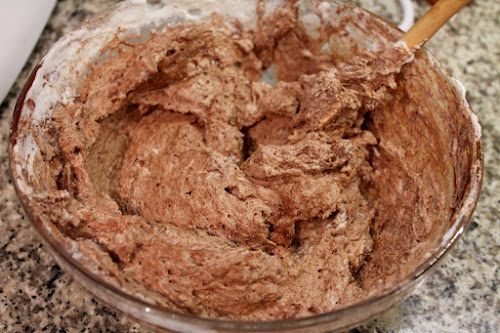 I didn't have to go far. The Arlington, Virginia bakery, Livin' the Pie Life, shared the recipe on its blog a few years ago. It's surprisingly easy, requiring few ingredients and--best of all for these hot summer days--it's a no-bake treat, requiring just enough heat to melt the chocolate, which can be done in the microwave. The recipe includes an optional hazelnut sauce, which sounds really good, but I didn't make, since I was taking them in to work for an office dessert contest, where they were a big hit. I cut them a lot smaller than the rather generous portions Bread Furst served. You can cut them into squares or Kit-Kat-like fingers.

1. Add peanut butter and oil to the bowl of a stand mixer and beat on medium-high speed until the mixture is light in color, about 3 minutes. Reduce speed to low and add the melted chocolate chips, beating until combined. Turn off the mixer and stir in the crushed cornflakes.

2. Line an 8 x 8 inch square baking pan with plastic wrap so that it overhangs the sides. Transfer the chocolate mixture to the pan and smooth the top with a spatula. Chill in the refrigerator until firm, about 30 minutes.

3. Melt the bittersweet chocolate chips and set aside to cool a bit. Add the cream to a bowl of a stand mixer (the bowl should be cleaned after step 1) and whip on high speed until soft peaks form (run a spoon through the cream and it should stand up a bit but fall back on itself; in contrast, stiff peaks will stand upright and not fall over). Fold half of the melted chocolate into the whipped cream, then add the remaining chocolate and fold it into the chocolate-cream mixture until the mixture is uniform in color. Spread the cream-chocolate mixture over the chilled chocolate-corn-flake layer, making sure to get the mixture into the corners and smoothing the top with a spatula. Bang the pan against the counter a few times to remove air bubbles. Cover with plastic wrap and refrigerate at least 4 hours until set (I refrigerated it overnight).

4. Using the plastic wrap that's overhanging the sides, lift the chocolate mass out of the pan. Carefully peel off and discard the plastic wrap. Cut into bars of desired size. If desired, dust the bars with cocoa butter by spooning a little bit of cocoa into a fine-mesh sieve and shaking it over the bars. Serve immediately or refrigerate again until ready to serve (the bars should remain refrigerated).
Posted by Cook In / Dine Out at 12:00 AM