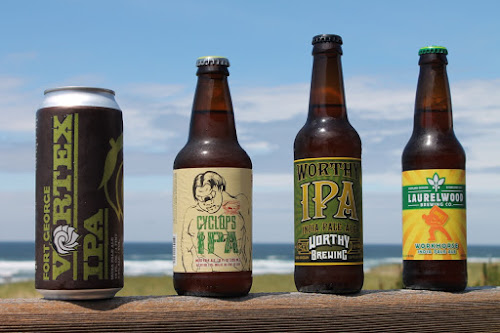 When I tell my East-Coast friends that we always spend a significant portion of our week in Oregon at the beach, they often ask me how the beach in Oregon is different than beaches near D.C. "Completely," is my usual answer. Beach time at Rehoboth Beach is a hotel-lined boardwalk, a groomed sandy beach completely packed with people, lifeguards, and gentle waves dotted with swimmers. We love our time there, but none of those things exist at our Oregon beach. If there's more than 5 other people on the beach it feels crowded. The sand is naturally contoured with driftwood. You can go in the ocean, although I never do, given how cold and powerful it is. Plus there are no lifeguards. There are walks on the beach, evening campfires and mountains in the near distance.

And there is really good local India Pale Ale (IPA). We always make a point to stock up on bottles (or cans) that we've never tried before to see if we can discover a new favorite. It's been 2 years since we did this tasting, since we weren't in Oregon last year. Our 2012 favorite was Ninkasi Total Domination IPA, which we included in our 2013 and 2014 tastings. We didn't include Ninkasi this year, but for a very good reason: it's now available on the East Coast! Yes, I can buy all the Ninkasi I want at Whole Foods now, and it's become our go-to IPA. Deschutes Brewery's Chasin' Freshies fresh-hop IPA bested our 2013 tasting. And in 2014, our champion was Laurelwood Brewing Company's Workhorse IPA. Laurelwood returned to our slate this year, along with three new options. On to the tasting! 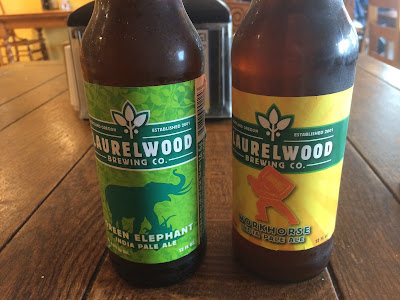 We had our first Laurelwood Brewing Co. IPAs at the Blue Heron French Cheese Company, our favorite lunch spot in Tillamook. We sampled two of them, our 2014 favorite, Workhorse IPA, and a new one, Green Elephant IPA. Upon our initial sampling, Green Elephant IPA was our favorite of the two. According to Laurelwood's site, Green Elephant has a "mellow malt character," which was definitely true. It has that clean, fresh even citrusy taste that lets the hops really shine. In contrast, Workhorse has a more balanced hop-malt profile and a touch of sweetness. That said, Workhorse was available at Fred Meyer, so we picked up a six-pack. The more we drank it through the week, the more we actually realized that it was a our favorite. It's got a good happiness, but it's refreshing too, the kind of IPA that works great in warm or cool weather.

Worthy IPA from Worthy Brewing Company was good, but probably our least favorite of this group.  It's not as muscular an IPA as I like, but it has a nicely balanced flavor. Better, but still not a favorite was Cyclops IPA from Cascade Lakes Brewing Company, which was decently hoppy but not overly so.

Our other favorite this year is Vortex IPA from Fort George Brewery. This is brewed in Astoria, Oregon, which is about an hour's drive from our beach house. This beer has a nice hop intensity, exactly what I like, while managing to stay very drinkable. It comes a 16-oz. can, so you get a little extra (or it's perfect for splitting if you're going to have a few). It was an ideal accompaniment to our Upper Crust Pizza.