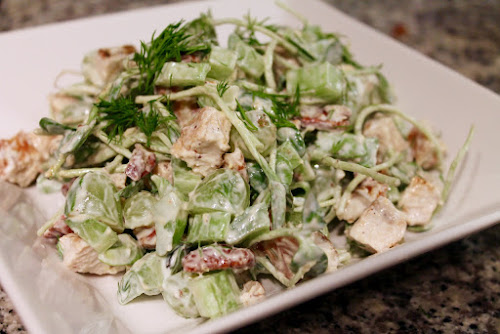 If I was going to do one of those blogs where you cook every recipe in one cookbook, I'd probably choose Julee Rosso and Sheila Lukins' The New Basics Cookbook. The book was published in 1989, and the recipes do show their age sometimes, but for the most part it's still an amazing collection of tasty recipes that focus on fresh ingredients prepared well.

I find their recipes to be quite flexible too, and I often treat them as a starting point for something just slightly different. Take this salad, which I adapted from the book's recipe for Pecan Chicken Salad. The essence of this recipe is the pairing of celery, grapes, pecans and chicken with fresh dill. It's a wonderful spring chicken salad combination. I changed the chicken cooking technique to make if faster, pan-frying chicken breast cutlets instead of braising chicken breasts in the oven. I also changed the dressing by using nonfat Greek yogurt instead of mayonnaise and sour cream, which lowers its calories and fat significantly, and by adding lemon juice and zest. I also served the salad with sunflower microgreens instead of watercress. If you haven't tried these microgreens yet, they are wonderful in salads. I see them at Whole Foods a lot lately.

1. Heat olive oil in a medium-size pan over medium heat. Pat chicken breasts dry with paper towels and add to the pan. Season chicken with sumac, aleppo pepper, garlic powder and a small pinch of salt. Cook until lightly browned on one side, about 5 minutes, then turn over and continue cooking until browned and cooked through, about 10 minutes total. Remove chicken from pan and transfer to a cutting board, allow to cool slightly, then chop into 1/2-inch pieces.

2. Heat a small frying pan over medium-low heat. Toast the pecans until fragrant, about 6-8 minutes, tossing occasionally to prevent burning. Set the pecans aside on a cutting board to cool slightly, then chop coarsely.

3. Combine microgreens, grapes, celery, all but 1 tsp. of the dill, the cooked chicken and the toasted pecans in a large bowl. Whisk together the lemon zest, lemon juice, yogurt, salt (to taste) and pepper in a small bowl, then add to the bowl. Toss the ingredients until evenly dressed. Serve in shallow bowls topped with an additional sprinkle of fresh dill.