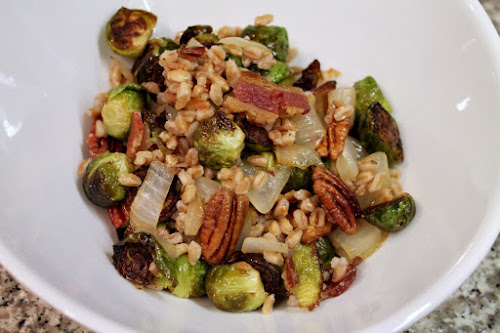 After a weekend of roughing it due to Snowzilla, it's time for some good eating. This is simple, easy winter fare that's like a "choose your own adventure": pair a chewy grain (farro), with an indulgent meat (hickory-smoked bacon), a roasted vegetable (Brussels sprouts) and a nut (pecan). You could make all sorts of substitutions to the aforementioned formula and end up with a great meal.

1. Preheat oven to 400 F. Add sprouts to a large bowl, drizzle with olive oil, sprinkle with salt and toss to coat. Transfer to an aluminum-foil-lined baking sheet, turning sprouts so their cut-side is down. Roast until browned, about 25-30 minutes. Remove from the oven and transfer to a large bowl.

2. Combine farro, 3 cups of water and a pinch of salt in a medium saucepan. Bring to a boil, then reduce heat and simmer until the farro is tender, about 20 minutes. Drain and transfer to the large bowl.

3. Heat a large skillet over medium heat. Cook the bacon until browned and crisp. Remove from the pan and set aside on a paper-towel-lined plate. Drain off the hot bacon fat, leaving about 1 tbsp. in the pan. Add the onion and sauté until softened, about 10 minutes. Add the onion and bacon to the large bowl.

4. Toast pecans in a small skillet over medium-low heat until they are fragrant, tossing occasionally to prevent them from burning. Sprinkle with the hickory-smoked salt and drizzle with honey. Stir, then add the 1 tbsp. of water and stir. When the water has evaporated enough to make a honey-syrup that evenly coats the nuts, remove them from the pan and transfer to the large bowl with the other ingredients. Toss the ingredients together and serve in shallow bowls.