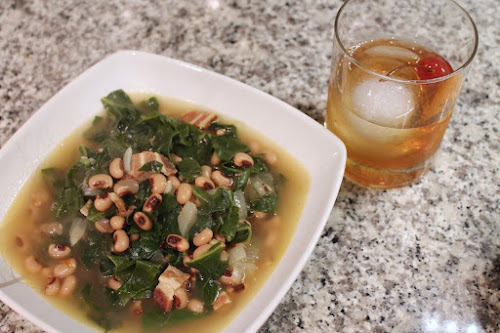 Do you believe in luck? Many people don't; I don't really--except that I sort of do. Like a lot of people, I know that many things in life happen by chance. I believe "luck" is when those are things you want to have happen. Like winning a contest, unexpectedly running into an old friend or being the last person to snag something special.

Certainly the number of things we do for luck attests to our belief in it. We kiss the Blarney stone, knock on wood and hunt for four-leaf clovers.

Then there's the practice of eating black eyed peas on New Year's Day. It's a tradition many Southerners observed, which I hadn't heard of until just recently, having read an article about it in the New York Times Food section. 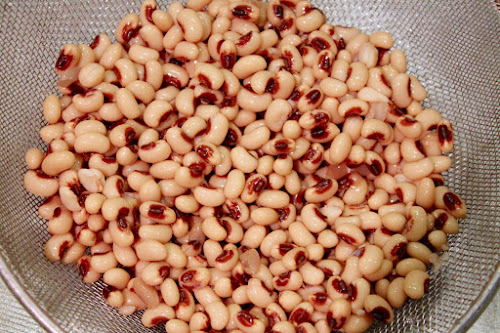 There are quite a few explanations for the practice, many of which date back to the Civil War and some go back to ancient times.

Although it's not a tradition I'm tied to, I'm certainly not one to turn down a good bowl of pork and beans with greens, which is what I made, inspired by the accompanying recipe by Kim Severson, as well as another Times recipe by David Tanis, I made my own version of the dish. Their dishes call for using dried or fresh peas, as well as ham hocks. They cook for several hours, which I'm sure is delicious, but I wanted a faster recipe--something you could make midweek to enjoy black eyed peas any day of the winter, not just on New Year's Day. So I use canned black eyed peas and bacon, specifically the hickory-smoked bacon from Benton's that I love so much. 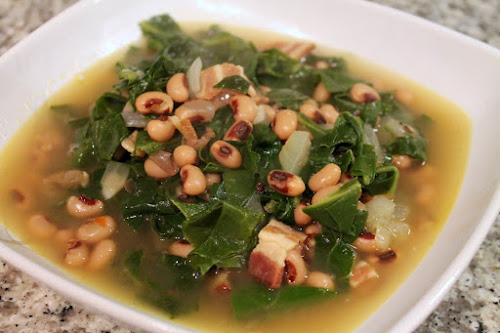 1. Cook the bacon in a Dutch oven or other large soup pot over medium heat. When browned and crisp, remove the bacon with a slotted spoon and transfer to a paper-towel-lined plate. Reserve 2 tbsp. of the hot bacon fat in the pot (use the rest for something else, like thin and crispy cornbread).

2. Add the onion to the pot and cook until softened, about 8 minutes. Ad the garlic and chili pepper flakes and cook another couple minutes until the garlic is fragrant. Add the chard leaves, season with salt and pepper and stir to mix with the other ingredients. Allow the chard to wilt a bit, then add the cooked bacon, black eyed peas, chicken stock, allspice and bay leaf. Increase heat to bring to a boil, then reduce heat to simmer for about 15 minutes.

3. Ladle the soup into shallow bowls and serve with cornbread and an old fashioned (recipe below).

Combine whiskey, simple syrup and bitters in a cocktail mixing glass with ice. Stir until very cold, then strain into a rocks glass with a single large ice cube. Squeeze the orange peel over the drink, rub it around the rim of the glass and drop it in. Add the cherry and serve.
Posted by Cook In / Dine Out at 12:00 AM