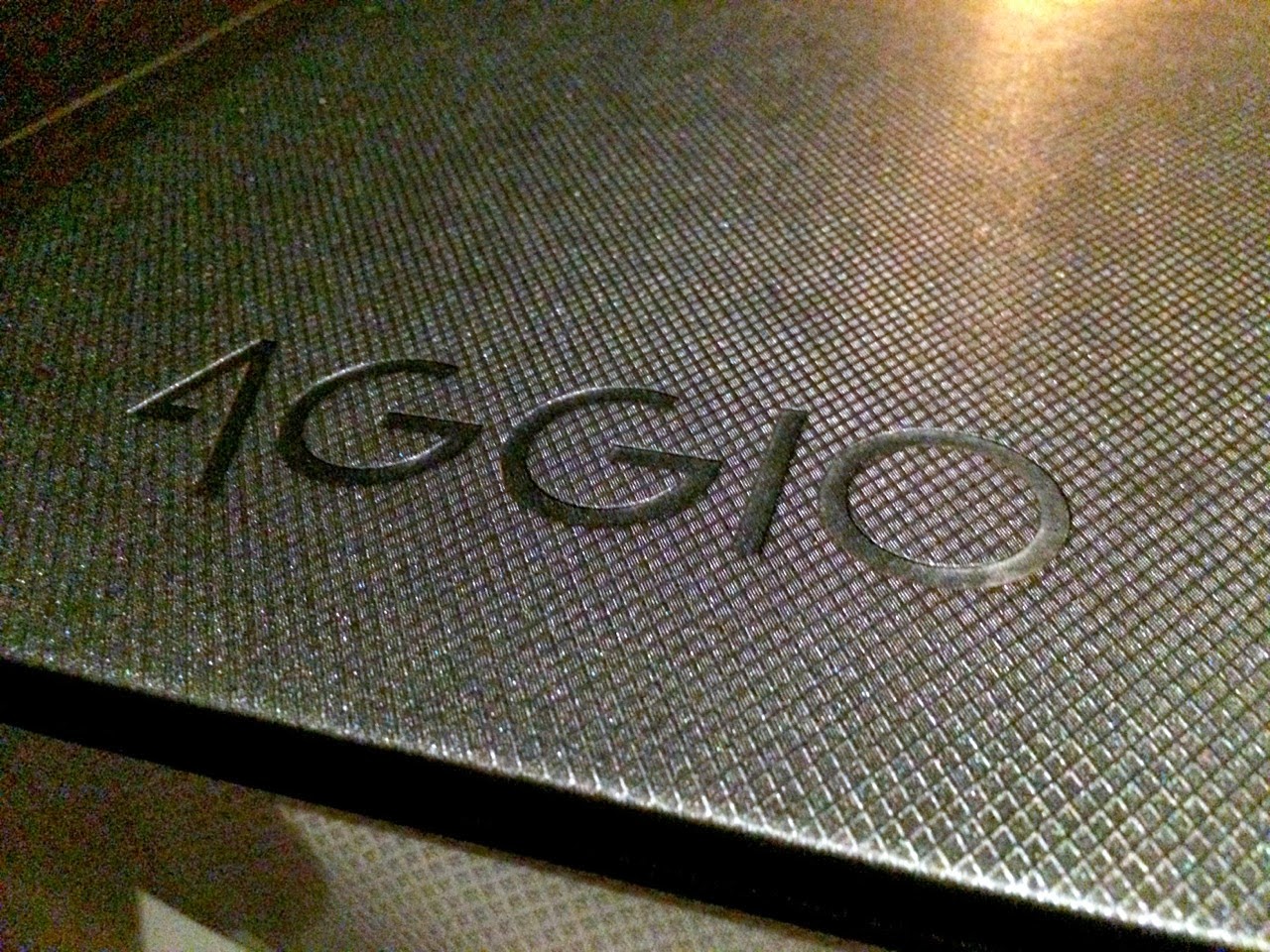 Update: As of December 2015, Aggio is closed. Range, its parent restaurant, remains open.

I fell hard for Range the first time we visited just over a year ago. Bryan Voltaggio's spacious and ambitious Friendship Heights restaurant managed to effectively meld grilled food, pizza, Italian, raw bar, bakery and more into one attractive package. During our first trip, we went the steakhouse route and were completely charmed. On our second visit, we opted instead for Italian fare and , while we still enjoyed the experience, it wasn't quite a magical as our first time.

With that in mind, I wasn't sure what to expect from Aggio, the new restaurant-within-a-restaurant concept that Voltaggio has created inside Range. However I am pleased to report that we were thoroughly charmed by it. Where Range is expansive, Aggio is narrow: a shorter menu focused on Italian cooking. Range's dishes are meant to be shared; Aggio's are served as individual portions. The Range section of the restaurant is bright and boisterous; Aggio is situated in the quieter and now even darker back portion of the restaurant. It's clearly a different experience.

Getting to Aggio means passing through Range. So even though Aggio has its own host stand, you still check in at Range, then you're led back to the Aggio entrance where you wait again. There were so many welcome greetings between the initial check-in and being seated that I got a little confused as to whether I was supposed to follow said greeters to my table. The entrance to Aggio lies at the intersection of the hallway to one of the kitchens so it's kind of a busy place. And despite Open Table's confirmation that Aggio, like Range, is "smart casual," it's definitely a bit more formal than Range. All this fuss raised a certain level of anxiety before we'd had our first bite.

But once we were seated and got acquainted with our very gracious server Gerard, we quickly got into the groove of what is a decidedly successful addition to the Bryan Voltaggio restaurant empire. Any inkling that the Italian side of Range was a weaker link quickly evaporates with Aggio. The food was outstanding. And those musings about the uneven service? I still don't get that. Everyone was falling-over-themselves nice and quite attentive. The only misstep was that someone refilled my still water glass with sparkling water. Oh the horror.

A great amusé should get tongues wagging, and Aggio has succeeded with its parmesan funnel cake, already one of the buzziest tastes coming out of the kitchen. Instead of powdered sugar, the summer boardwalk staple comes dusted with dehydrated parmesan, a crisp and savory introduction. It's followed closely by crispy breadsticks dusted with aromatic fennel pollen and rosemary focaccia bread with creamy ricotta and olive oil (plus an interesting pureed mortadella spread).

We started the meal proper with a beautifully composed plate of chioggia beets with tomatoes, rosemary, pine nuts and arugula, which brought back fond memories of the roasted beet and carrot salad we enjoyed years ago at Voltaggio's Frederick, Md., restaurant Volt (a dish I paid homage to with my beet salad).

Caesar Salad's rousing comeback gets yet another great twist at Aggio, where the salad is composed of romaine hearts, kale and collard greens. The hearty greens are thankfully handled with skill to prevent an endless round of chewing. The shavings of smoked dehydrated scallop that a server adds as a final touch impart the subtle fishy pungency usually left to anchovies. The best part of the salad is the fried oysters; crispy on the outside and luscious on the inside, they make a great stand-in for the typical croutons.


Our pasta choice was the meatballs with chittara (like spaghetti but formed a little differently), which was another highlight. The pasta was perfectly cooked, and if you like meatballs, these are great ones: sized between golf balls and tennis balls and made with three meats. Our server explained that the ragu pomadoro's subtle sweetness comes from carrots, one of the many delicious tidbits he dropped throughout the evening.

Portion size is definitely something to consider when ordering at Aggio, and our server helped with this. The meatballs, for example, are a large dish that is easily shared, whereas the guinea hen is really a smaller portion just meant for one (we shared both anyway though by passing our plates). This was another nice dish. The hen was cooked just right and accompanying sauce had just the right amount of sweetness. The only thing that disappointed us during dinner was the side of broccoli rabe, which was a bit stringy and under-sauced.

An evening at Aggio certainly benefits from having Range nearby. When we wanted some glasses of wine, we got the benefit of advice from Range's Master Sommelier Keith Goldston in making our choices from its list of Italian reds. The glasses were then delivered by Aggio's Master Sommelier Kathy Morgan, who imparted more knowledge about what we were drinking and checked back with us about whether we were enjoying it (we were, of course).

We also sampled a couple of Aggio's cocktails named for famous Brat Packers. It's It's hard to say whether I liked my Chairman (that's Frank Sinatra's nickname, Chris tells me) made with genever,  kina l’avion d’or (a quinine-flavored aperitif), Gran Classico, chablis and flavored with oak or Chris's Sammy Davis Jr., a gingery concoction of Ramazotti (an Italian amaro), bourbon, bitters and ginger beer. Range has already distinguished itself with its cocktail offerings, so it's no surprise that Aggio presents similarly interesting choices.


We finished the night with a delightful dessert duo: a mysterious box of hard dark chocolate that, when broken into, reveals a filling of mascarpone and chocolate mousse, and a ball of coffee orange gelato rolled in hazelnuts, the two separated by a swath of caramel. As if this wasn't enough sweet treats, coffee and pomegranate truffles arrive just before the bill.

Our experience at Aggio was so pleasant that next time we want a fine dinner from a Bryan Voltaggio establishment in Friendship Heights it will be hard to choose. Further complicated matters is the fact that he's relocating his casual soup and sandwiches lunch spot Lunchbox (which was in Frederick, Md. and closed a few months ago) to the Chevy Chase Pavillion two floor down from Range/Aggio. Thanks Bryan! After having loved Volt, Range and Aggio, I'm sure we'll find plenty to love at Lunchbox too.