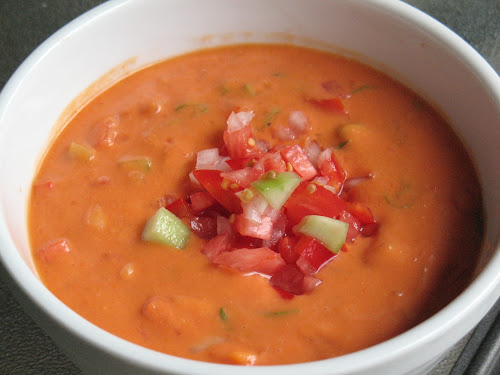 Last month's most popular recipe is a dish perfect for the sweltering days at summer's end: a creamy Andalusian-style gazpacho, which I adapted (lightly) from America's Test Kitchen's recipe. Much of the dish's popularity can be attributed to America's Test Kitchen, which selected my gazpacho photo (above) for their Feed site's recent Twitter Fan Photos of the Week.

So it was another month then that The Happy Endings Whore's Bath cocktail had to settle for being my site's second most popular post. It surpassed 1,000 total views in August, still far and ahead the most popular thing I've written.

Two other popular recipes from this month: Cereal Milk Baked Alaska with Brown Butter Cake and Roasted Pattypan Squash with Basil.
Posted by Cook In / Dine Out at 8:23 AM