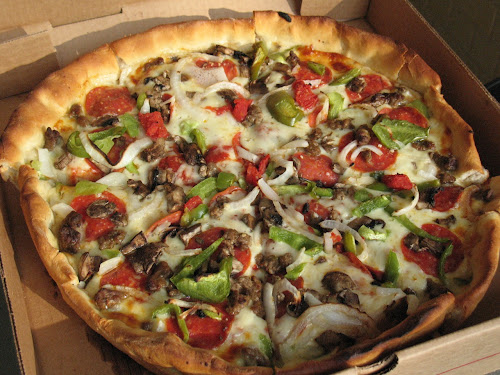 The best Chicago pizza is probably had in Chicago, but regardless of whether it's authentic "Chicago" pizza, Armand's pizza is just really good.

It's a shame then that rising costs have forced the D.C. chain to close its first branch in Tenleytown on Wisconsin Avenue at the end of the month.

Armand's is a beloved pizza institution. This was the chains first branch, opened in 1975, which has since received a number of accolades. It is frequently cited in publications like Washingtonian as among the best pizza chains in the area. It has hosted birthday parties for presidents' children, and D.C.'s current most famous foodie Michelle Obama has been there.

For me personally, it is sad, since it has been our favorite pizza for many years. Sure, we could go to one of the remaining branches (and I imagine we will), but given their distance, it won't be as often, and we will no longer be able to enjoy having their pizza delivered at home (where will we get our pizza delivery now?!).

Our favorite pie is their Original Chicago Combo, a balanced combination of meat and vegetable toppings featuring Italian sausage, pepperoni, onions, green pepper, tomatoes and mushrooms. It is deeply satisfying.

We're trying to get our fill before the doors close June 30. I'm having it tonight in fact.
Posted by Cook In / Dine Out at 4:43 PM