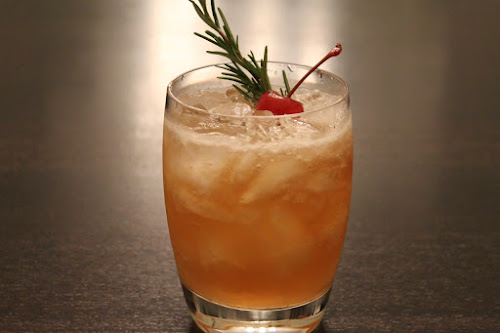 Throwing a holiday party for friends this week? Having family over for a Christmas Eve or Day get-together? No matter the occasion, your guests will enjoy themselves even more if they have a good cocktail in hand. Here are five suggestions for drinks that I think will go just right with the holidays.

My idea for this drink was to create something that evoked the Christmas tree, in a figurative sense. The Clear Creek Eau de Vie of Douglas Fir quite literally evokes a Christmas tree, since fir trees (especially noble firs) make the best Christmas trees. Don't skip the garnishes: the rosemary evokes a fir tree branch and its tree-like scent helps complete the experience as you sip the drink, and the cherry looks a bit like a red ball ornament--and together they are green and red, so they're perfect. Otherwise, the drink's other flavors--bourbon, ginger, cinnamon and spice are meant to evoke seasonal flavors.

Combine bourbon, eau de vie of douglas fir, orange liqueur, cinnamon syrup and bitters in a cocktail shaker with ice. Shake until very cold. Strain into a rocks glass filled with crushed ice, top with ginger beer and garnish with the cherry and rosemary sprig.

Note: to make cinnamon syrup, combine 1 cup water, 1 cup sugar and 2 cinnamon sticks in a saucepan and bring to a boil over high heat. Reduce heat and simmer for 10 minutes. Remove from heat, allow to cool, discard cinnamon sticks, and store syrup in a container in the refrigerator. 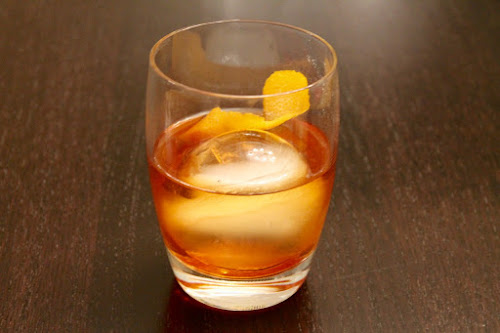 The Old Fashioned is such a wonderfully simple classic, especially--as has been popular lately--discarding the elaborate garnishes that were later added to the drink and distracted from its simple pleasure. Just an orange peel is the only garnish it needs--you can flame it if you must, but it's perfect fine inflamed. Substituting maple syrup and Free Brothers whiskey barrel-aged bitters push this more towards a winter drink perfect for the holidays. Some people building their old fashioneds in a rock glass, but I prefer to mix them in a cocktail mixing glass so everything is nicely mixed and appropriately diluted.

Combine bourbon, maple syrup and bitters in a cocktail mixing glass with ice. Stir until well chilled (at least 30 seconds). Strain into a rocks glass with a single large piece of ice. Squeeze the orange peel (skin-side down) over the drink, then rub it around the rim of the glass before dropping it on top. 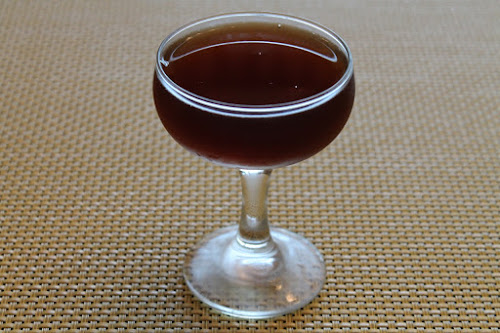 I recently acquired a bottle of homemade coffee liqueur that I won at a charity auction. The liqueur is absolutely wonderful--intensely coffee flavored and just sweet enough. I wanted a good cocktail that would show off a touch of coffee flavor, and this Death & Co. drink was just perfect. The mezcal, sherry and sweet vermouth combine to make this an excellent choice for a cocktail that's a bit on the savory side.

Combine all ingredients in a cocktail mixing glass with ice. Stir until well-chilled, at least 30 seconds. Strain into a cocktail glass. No garnish. 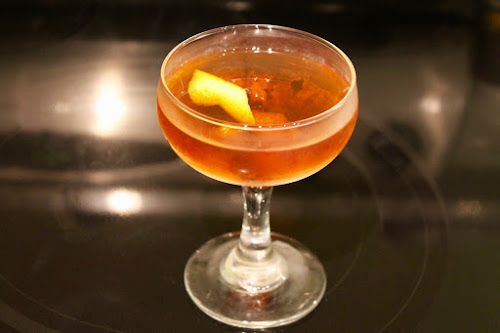 The Riccione
Adapted from a recipe in Saveur originally from Lincoln in Portland, Oregon

The description on Saveur's website that accompanies this drink describes it as a sort of Manhattan made with sherry and nocino, an Italian walnut liqueur. Given that the Manhattan is my favorite cocktail, I was completely sold on this as another great winter variation on the whiskey-vermouth classic.

Combine bourbon, vermouth, sherry, nocino and bitters in a cocktail mixing glass with ice. Stir until very cold. Strain into a chilled coupe and garnish with the orange peel. The Pilgrim
Recipe by Dale DeGroff, The Craft of the Cocktail and King Cocktail

This recipe accompanied Washington Post spirits writer M. Carrie Allan's recent great story about hospitality and bartending. It's a recipe from bartender/cocktail writer Dale DeGroff, author of The Craft of the Cocktail. In the book, DeGroff share how me made a warm batch of this cocktail on Thanksgiving for Associated Press photo editors who worked nearby and had become regulars at the Rainbow Room Promenade Bar when DeGroff worked there. He served it warm; I served mine cold (it's designed to go either way). The original recipe in the book makes 6 servings; the version that appeared in the Post, which also appears on DeGroff's website, was scaled for a single drink and also changed some of the ingredient proportions, which is what I used below. The original recipe also calls for pimento liqueur, which frankly I've never heard of, or demerara simple syrup and pimento bitters--something DeGroff markets himself. I opted for simple and Angostura bitters.

Combine all ingredients in a cocktail shaker with ice and shake until very cold. Strain into a cocktail glass and serve with no garnish. (To serve warm, combine the ingredients without ice in a saucepan and gently heat on the stove until warm--do not let it boil. I recommend using a tempered glass if going this route.)

Tabard Cocktail (tequila, sherry, Drambuie and bitters)
Posted by Cook In / Dine Out at 12:00 AM