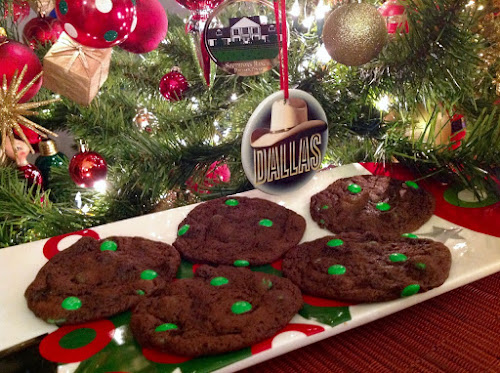 All she wanted was a life where she and Bobby were happy. And she got it, for the most part. But one evening, just as they were reconciling after 2 years apart, Pam had a terrible dream in which Bobby--her lifetime love and former husband--was murdered out of spite by her deranged half-sister Katherine.

You see, Katherine always had a thing for Bobby. She even fabricated a letter from Pam in which Pam said she wanted to end her marriage to Bobby. It was a contributing factor in their divorce.

During the dream, following Bobby's "death," Pam invested in a Colombian emerald mine in Bobby's honor, a decision that sent her on a grand adventure to South America. This dream was so vivid that Pam shared the whole thing with Bobby. Later, she made these cookies for Bobby, sort of as a joke, but in a way, they symbolized her unending love for him--that she would honor him even if he was gone. Of course, Katherine thought the symbolism was rather silly, opting to bake some frosted hats with cheap gumdrops. Pam knows that Bobby likes her cookies best. 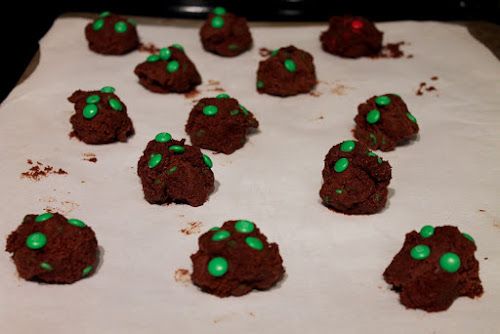 1. Combine the butter, sugar and brown sugar in the bowl of a stand mixer and beat on medium-high until light and fluffy, about 2 minutes (alternatively, combine the ingredients in a large bowl and beat with a hand mixer). Add the egg and vanilla and beat until combined.

2. Whisk together the flour, cocoa powder, baking soda and salt in a medium bowl. Add dry ingredients to the bowl with butter and sugar and beat on low speed until combined. Add the milk and stir into the dough with a spatula, then stir in half of the M&Ms. Cover the mixing bowl with the dough with plastic wrap and chill in the refrigerator for at least a half hour.

4. Spoon the dough into golf-ball-size pieces and place 2 inches apart on the baking sheet (you should be able to get 12 onto each sheet). Flatten each mound slightly and place a few additional M&Ms on top of each cookie. Bake the cookies until the edges are done and the center appears slightly underdone, about 9 to 10 minutes. Remove from the oven and allow the cookies to cool on the baking sheet for about 5 minute, then carefully transfer the cookies to a wire rack to cool completely.