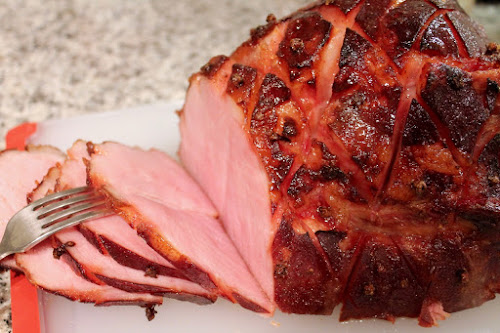 There are so many things to be cooked in this world. That may seem like a really obvious statement, but it's true, and sometimes that means that seemingly common dishes don't get made.

For example, I realized recently that, while I eat ham all the time and have all my life, I'd never actually prepared a ham myself. It's always something I get at other people's homes during the holidays or sliced on sandwich. I didn't even know how or what to buy to make a ham.

Turns out, it's really quite simple. Most of the time, hams you buy at the grocery store are already cooked, which makes the cooking you're going to be doing with it really easy. Most hams are cured in brine (the alternative being a dry brine), so they are nice and juicy. The trick then is not heating them in the oven too long, since you don't want to dry them out. 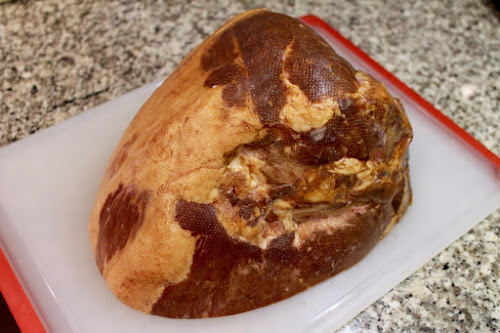 There's also two basic cuts: shank end or rump end (also referred to as "butt" or "sirloin" end). The rump end is leaner, but the usual shape of its bone makes it a little harder to carve, so many people prefer shank. I ended up with rump and frankly I didn't find it that hard to carve. If you can carve a Thanksgiving turkey, you can carve a ham. Of course there's also the sort-of-pre-carved spiral-cut ham, but I was concerned that all those open cuts would make it more likely to dry out.

When I think of flavors I like with ham, two immediately come to mind: honey, which is amazing with ham and clove, the spiky little spice that adds a decorative look to the outside of the ham but also great flavor. This recipe, which I found on the McCormick's spice company's website, was just what I was looking for.

I scored the ham with a traditional criss-cross pattern and also stuck whole cloves in the meat all over. This ham was so tasty: juicy, sweet and a just a bit spicy. 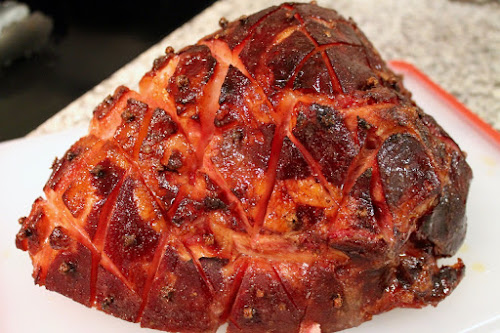 2. Set ham in a roasting pan lined with aluminum foil. Using a sharp knife, score the ham making straight parallel cuts about 1 1/2-inches apart from one side of the ham to the other. Make another series of parallel cuts that intersection the first set of cuts to make a diamond pattern. Be careful not to make the cuts too deep: they should cut through the skin into the layer of fat below it but not into the meat. Use a thin skewer to poke holes in the center of each diamond and place a clove in each hole. Bake the ham for 1 hour.

3. Combine brown sugar, honey, water and ground cloves in a small bowl. Remove the ham from the oven and pour the sugar-honey-clove mixture over the ham. Continue baking the ham another half hour, basting the ham with the honey mixture every 10 minutes. Transfer the ham to a cutting board and let it rest 15 minutes before carving.
Posted by Cook In / Dine Out at 12:00 AM