On Food and Language: Evolution of 'Bruschetta' 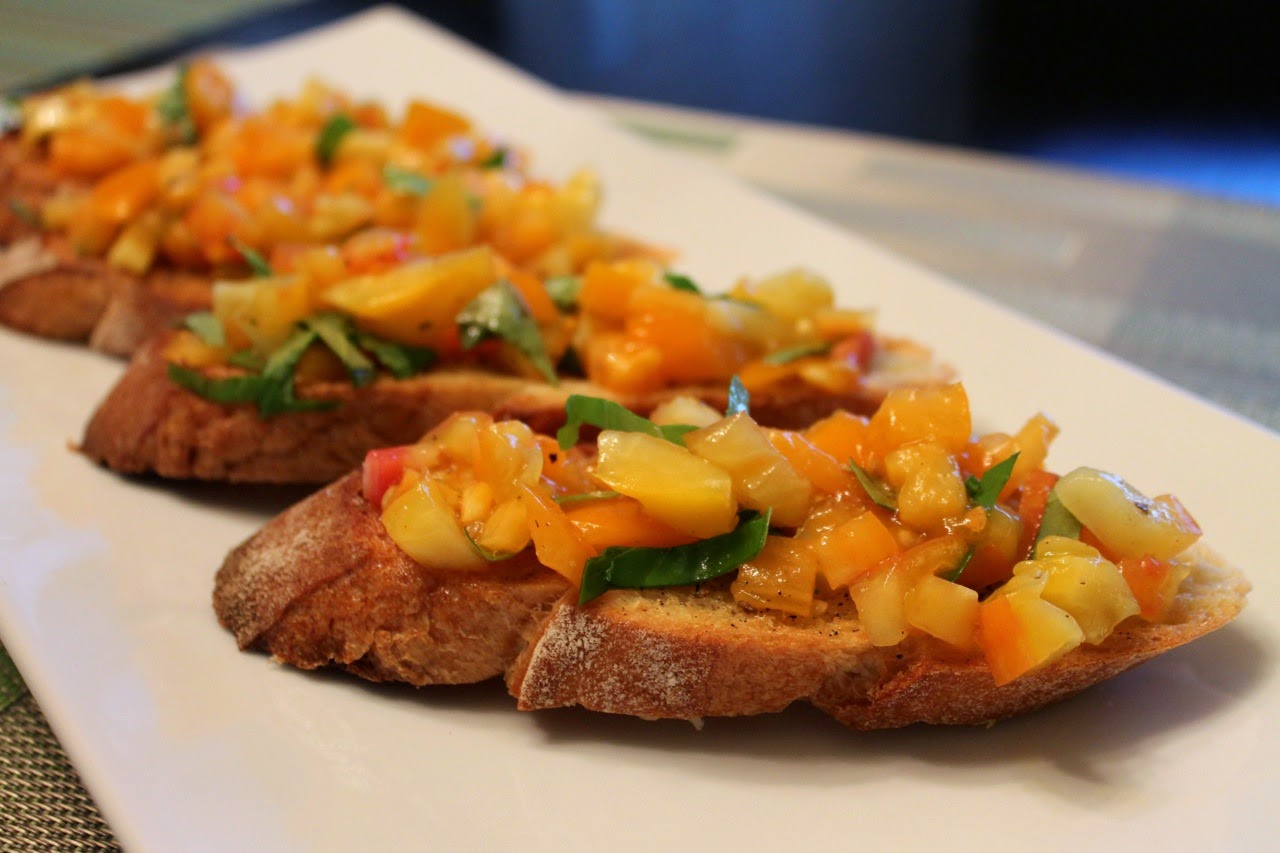 Let's try a quick exercise. I'm going to toss out a word and I want you to close your eyes and envision what it represents. Here's the word: "bruschetta."

What did you see? A piece of grilled toast rubbed with garlic and drizzled with olive oil? Said toast topped with chopped tomatoes and basil? Or perhaps just the tomato topping and no bread at all?

That all of these answers are possible aren't just examples of variation. It's a specific linguistic phenomenon called semantic change, the change over time in the meaning of a word. In the case of bruschetta, what was once a word to describe a piece of garlic-rubbed and olive-oil-drizzled toast has since come to mean several different things, including seasoned chopped tomatoes and basil--referring to a popular bruschetta topping (sans the toast)--as well as some other meanings. An unscientific poll of my Twitter and Facebook followers revealed this variation: when I asked them what came to mind when they saw the word "bruschetta," I received replies that included garlic toast with something fresh (like tomatoes), a snack of seasoned grilled bread with tomatoes and olive oil and, lastly, just tomatoes.


According to the Food Lover's Companion, "bruschetta" comes from the Italian word bruscare, which means to "roast over coals." The book goes on to define bruschetta as a traditional garlic bread made by rubbing slices of toasted bread with garlic cloves, drizzling the bread with extra-virgin olive oil and seasoning it with salt and pepper. Tomatoes and basil are not mentioned.

The book's definition appears to align with the traditional Italian definition. In Marcella Hazan's The Classic Italian Cookbook from 1973, she includes a recipe for bruschetta exactly as described in the Food Lover's Companion: toasted bread rubbed with crushed garlic, drizzled with olive oil and seasoned with salt and pepper. Again, no tomatoes. However, her more recent 1992 cookbook, Essentials of Classic Italian Cookbook, includes a separate recipe for a "tomato version," identical but with the addition of a topping of diced tomatoes with a sprinkle of basil or oregano.

Published around that same time in 1989, Julee Rosso and Sheila Lukins' The New Basics Cookbook describes bruschetta as garlic-rubbed and olive oil-drizzed toast but then goes on to say it can be embellished with various toppings, including tomatoes, which are found in all three of their bruschetta recipes, even their "basic" one. It's still clear though that they consider the toasted bread to be the bruschetta. Introducing "our basic bruschetta" recipe they write, "when we make bruschetta, we top it with a heady tomato mixture..." "It" is the toast; the tomato is the topping.

More recently, however, there has been a shift towards using "bruschetta" to mean not the toast, but the toast plus its topping. This is a subtle, but I think very important distinction. When a dish consists of a primary ingredient plus secondary elements, you would not remove that primary ingredient and then use the term to describe only the secondary elements. Tomato sauce, mozzarella and pepperoni could not be called "pizza" unless it is sitting upon a baked bread crust. However, when a dish consists of multiple primary elements, it is possible to remove one (or more) and still refer to the dish with that name. It is not uncommon to see Caesar Salads missing their croutons or anchovies, for examine. And lots of people run around drinking "martinis" that contain neither gin nor vermouth.

In the case of bruschetta, I became aware of its drifting definition earlier this year while tweeting with another food blogger.

She had posted a tweet about a recipe she described as a "fun twist on bruschetta," the Bruschetta Quinoa Casserole from the blog The Iron You. In this recipe, the writer made a quinoa casserole with tomatoes, onion, garlic, cheese, herbs and seasonings. In describing the dish, the writer says, "this casserole tastes like bruschetta, exit the bread, enters the quinoa." Implicit in his statement is that bruschetta is toast and tomato-herb topping, not toast which may have a tomato-herb topping. In such an equation, you could conceivably remove the bread as an element in the dish and still have the dish. Thus, we come to the next evolution: calling a tomato-topping "bruschetta."

Another blogger friend of mine did just that when he posted about bruschetta he had made. The photo accompanying his post had no bread; it was a (rather delicious looking) bowl of seasoned chopped tomatoes with basil. He told me he was serving it with bread, but clearly he considered "bruschetta" to be the topping, with the bread as an important but secondary component. And he's not alone in this thinking. This Kraft salad recipe refers to "bruschetta on French bread," clearly implying that bruschetta is a topping. This Tyson recipe for Better Bruschetta Chicken Salad contains tomatoes, olives and other bruschetta toppings, but doesn't make any reference to bread. The popular restaurant chain Applebees used to have a dish called Bruschetta Chicken, described as "Grilled chicken seasoned with bruschetta, parsley and a blend of Italian cheeses." Although I'm still having trouble understanding how chicken can be "seasoned" with tomatoes and garlic, I'll acknowledge the even greater difficulty of performing that maneuver with toast.

With these and other similar recipes, bread has clearly, if not fully divorced, certainly separated from bruschetta--even though originally that's all bruschetta was. Not surprisingly, at the grocery store I found jars of various toppings that market themselves as "bruschetta," not bruschetta toppings.


That corporations have had a hand in the changing definition of "bruschetta" should not come as a surprise. Marketing has long played a role in how we think and talk about food. In The Language of Food, linguistics professor Dan Jurafsky details the evolution of ketchup. Today, we think of ketchup as a sweet and sour pureed tomato sauce, but initially, the term referred to a type of Chinese fish sauce. Jurafsky details how the sauce transformed from its fishy roots to its modern day incarnation as an essential American hamburgers and fries condiment. When it comes to ketchup, Heinz is king. Although it's inconceivable today to use the word "ketchup" to refer to a sauce made from anything but tomatoes, Heinz own use of "tomato ketchup" on its label is a nod to the possibility of there being ketchups that aren't tomato-based. The term "ketchup" feels pretty stable at the moment, but Heinz was responsible for settling one of the word's last divisions, whether it should be spelled "catsup" or "ketchup." They chose the latter, and now hardly anyone uses the other spelling (the Merriam-Webster dictionary refers to "catsup" as a variant of "ketchup").

All this is to say that the words that we use to describe what we eat can and do change. As our tastes and culture evolve, so too does our language. "Tweeting" is something that only birds used to do, yet today it means something altogether different, a definition that has become (possibly the more common) only within the last 5-6 years. You can be a linguist and view this as a good thing, or a language "maven" and view it as sacrilege, but once a word develops a new common usage, there's no turning back. Given the current craze for all things gluten-free, perhaps it is conceivable that someday I'll walk into a restaurant, order a pizza and receive a dish that includes no bread.