To say China Chilcano's opening has been hotly anticipated is an understatement. The Peruvian restaurant with Chinese leanings is the latest in the successful line of Washington, D.C. restaurants from José Andrés, the Spanish-born chef who led the effort to make "tapas" a household word in the U.S. 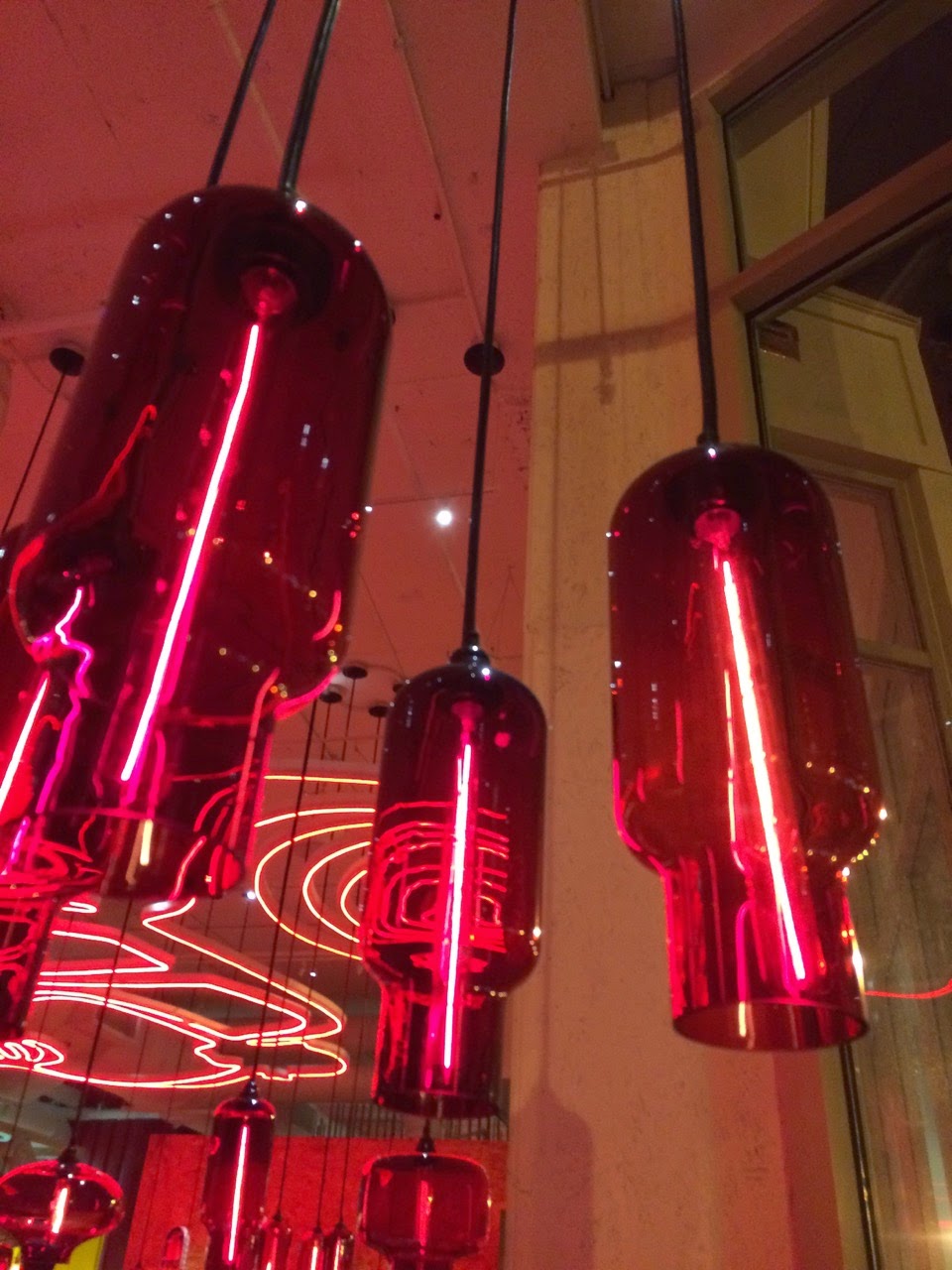 The handsome space--decked out in vibrant red neon and bamboo poles--sits on a 7th Street NW block with Andrés' Spanish Jaleo on the north end and his Mexican Oyamel on the other. Just a couple blocks away reside his Mediterranean Zaytinya and gastronomic laboratory Minibar (and its attached bar, Barmini). If you count his roving truck, Pepe (and I wouldn't discount its tasty sandwiches), that makes 7 different ways to enjoy his food in D.C. Top chef indeed.

Although China Chilcano's menu fuses South American and Asian flavors, this isn't "fusion" in the typical sense of smacking together two disparate cuisines. Rather, as explained by our server (and the restaurant's website), the cuisine is fundamentally Peruvian as influenced by the country's Asian immigrant cuisines, particularly Chinese (Chifa, in Peru) and Japanese (Nikkei). 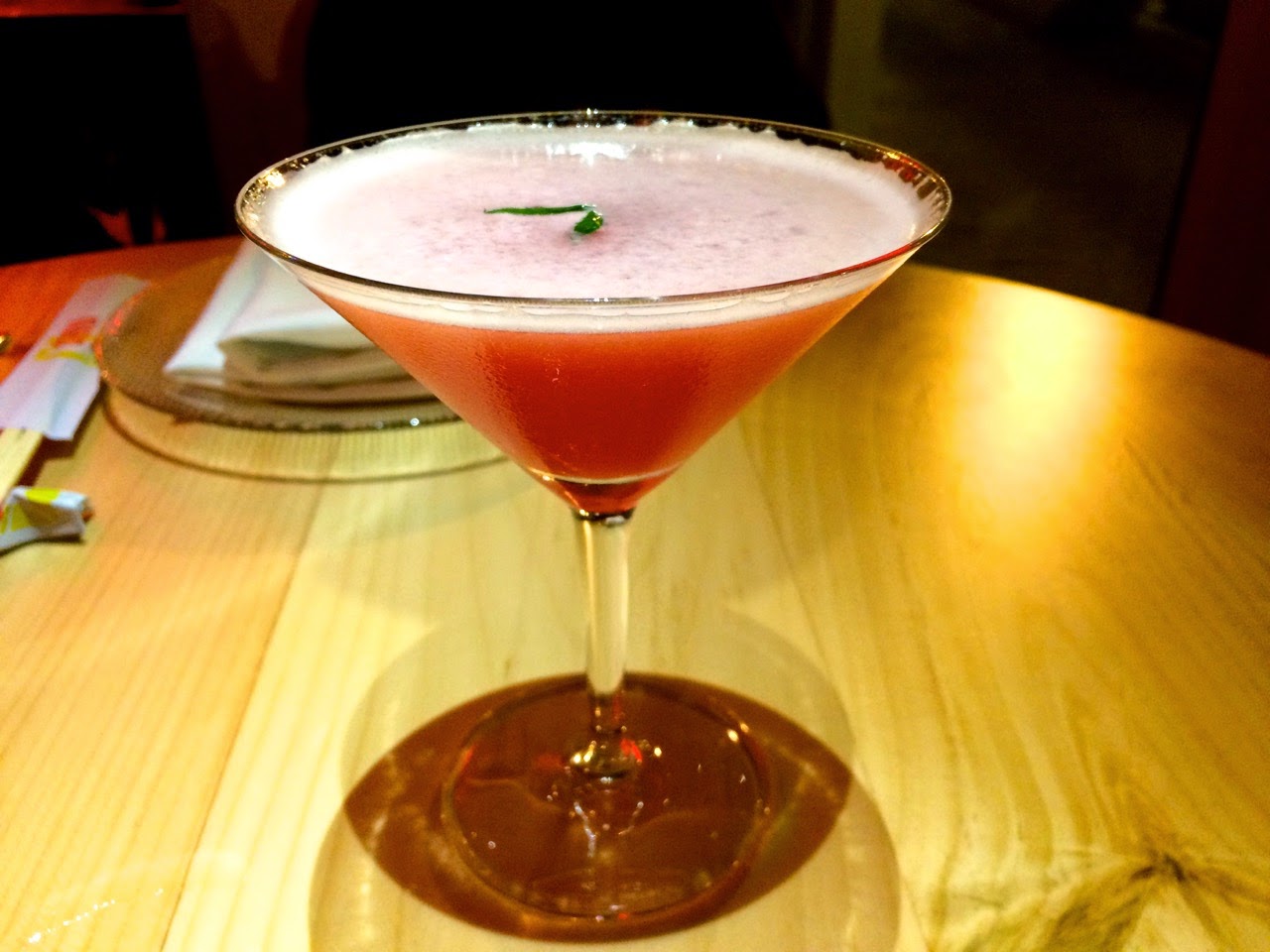 Of course, cocktails are a great way to start the evening, and China Chilcano's drink menu showcases the restaurant's infatuation with pisco, the famed Peruvian brandy. The popular pisco cocktails show up here like the punch and the sour, the latter is as tart-sweet and frothy as expected, finished with a few squirts of the traditional Amargo Chuncho bitters. Our server told us she expects the Cholotini will become the restaurant's most popular drink, and I can certainly see why. The fruity but not too sweet concoction made of pisco, prickly pear, passion fruit and lemon resembles a pisco take on the Cosmopolitan. While I liked the drink, I preferred the Manhattan-ish Capitán made with Sour cherry pisco, vermouth, Amargo Chuncho bitters. With a taste akin to a caramel apple, it was both Chris and my favorite drink.

Diners experienced with eating at Andrés' restaurants will find the dinner menu familiar: small plates divided into groupings, some of which are more obviously meant as starters (dim sum, salads and vegetables) and entrees. In the latter camp, China Chilcano's menu features "Chaufas and Tallarines" (fried rice and noodles), the Chinese Connection (the most obvious "fusion" dishes) and "Peruvian to the Bone."

We chose one dish from six of the menu's nine groupings and tried to strike a balance between its more Asian- and Peruvian-leaning dishes. We weren't disappointed with anything we had. China Chilcano's Asian-influenced Peruvian dishes are as enjoyable to eat as they are beautiful to look at. 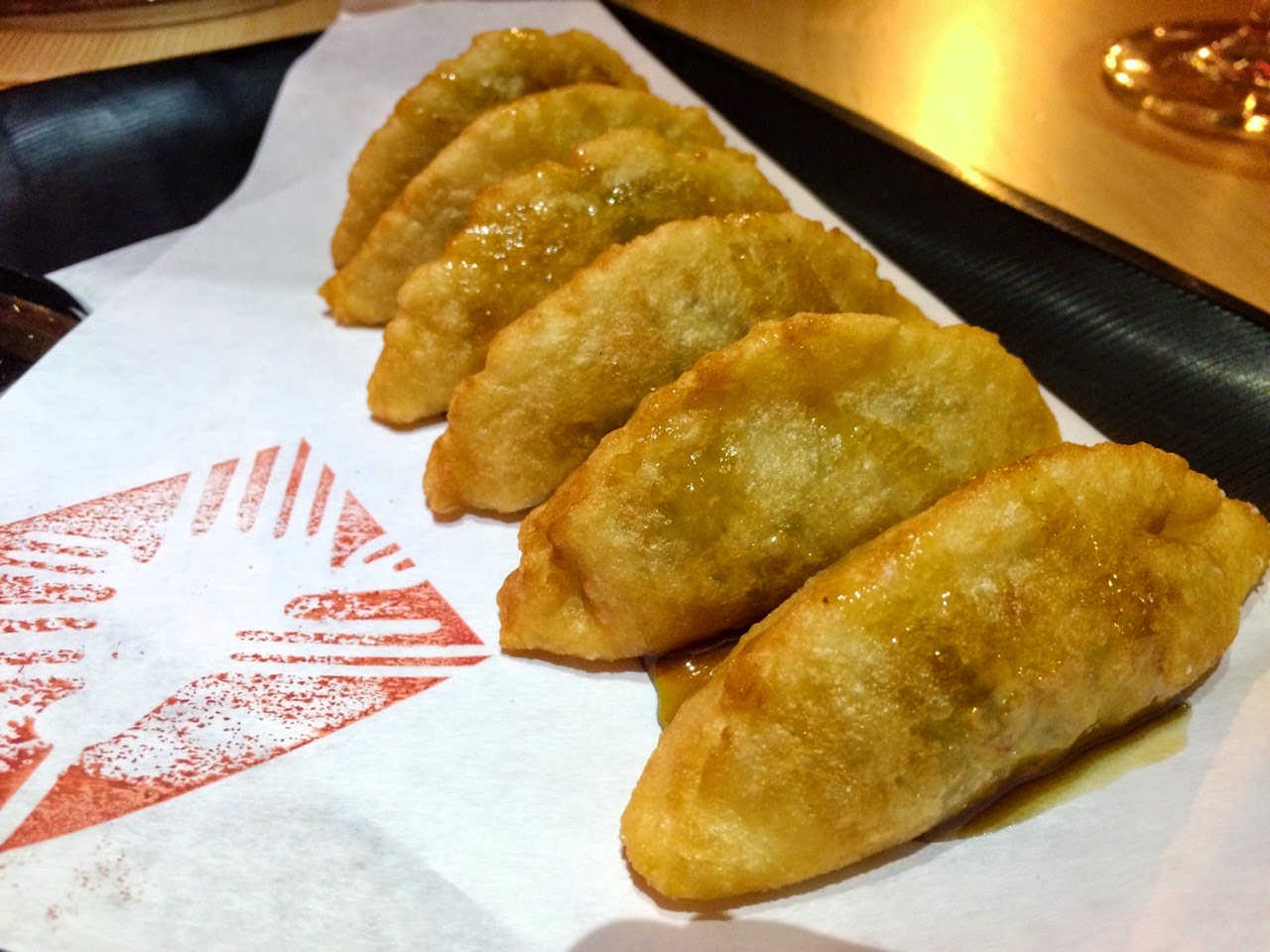 The starters set the tone for China Chilcano's tasty and beautifully presented food. First up was the Yuquitas Rellenas, which are yuca fritters with yellow pepper, wood ear mushrooms. The fritters arrived at the table piping hot and were finished at table with a light drizzle of brown sugar syrup. We also sampled the Pegao Norteño, lamb pot stickers with cilantro and cumin served a smear of winter squash sauce. The pot stickers arrived connected with a crispy lace topped with a flower and a few little pieces of gold leaf like a gorgeous edible doily.

My favorite of the early dishes was the quinoa salad. Seriously! Since quinoa is native to Peru, I had a hunch that China Chilcano might be able to do something great with it, and I wasn't let down. The salad arrived with Peruvian corn (think large pieces like hominy), onion, tomato, cucumber, fresh cheese and bibb lettuce leaves to roll up the salad like a taquito. The salad is nicely dressed--just enough to give it some zest.

Is it too soon to crown a signature dish at China Chilcano? I've seen a fair amount of buzz for the Aeropuerto, and after sampling the dish, I can see why. Fried rice is mixed with 20 vegetables, tossed with a sweetened soy sauce and topped with fried thread noodles and adorned with airplane-shaped vegetable cut outs. It's the kind of dish you just can't stop eating. 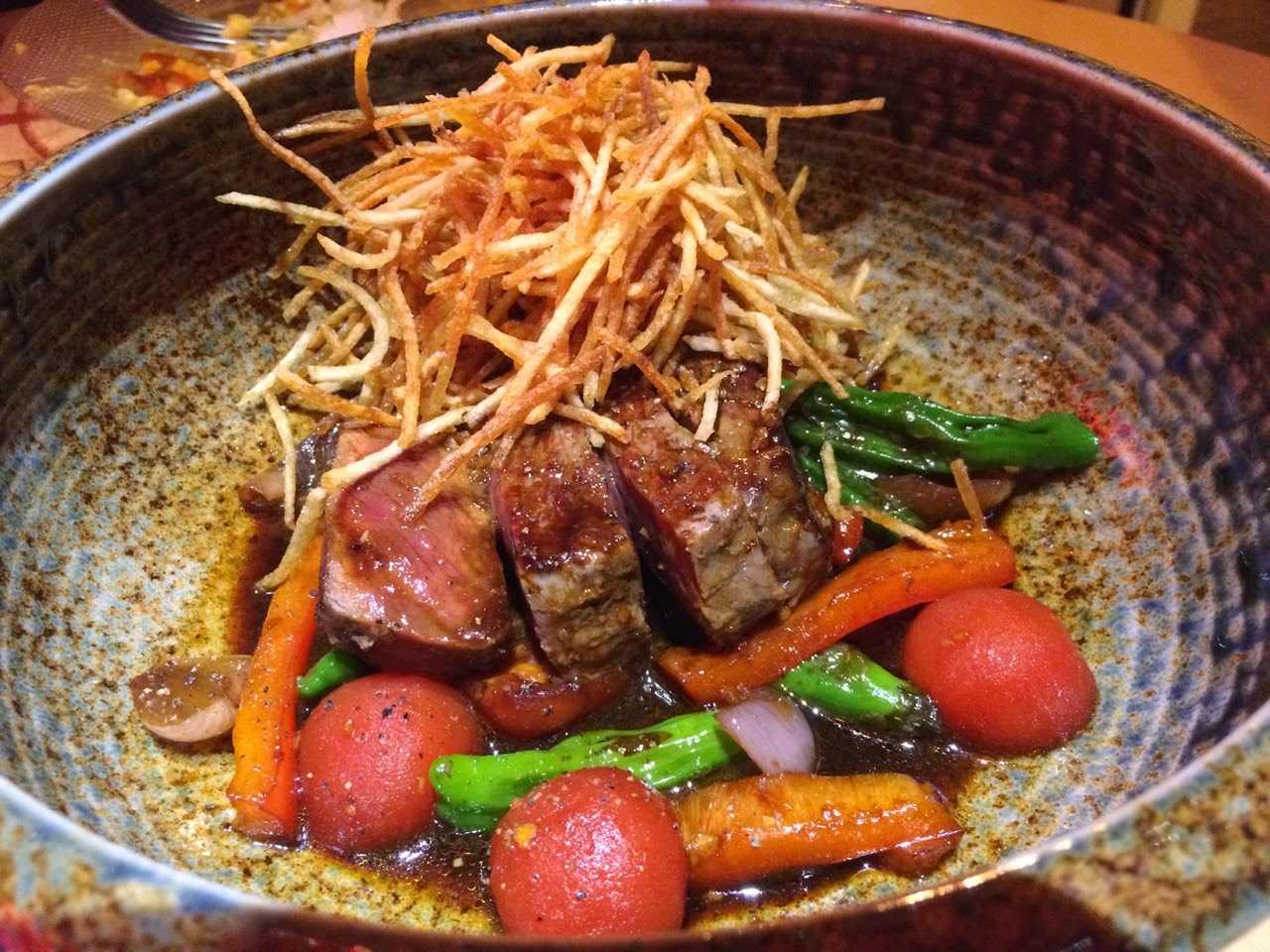 Lomo Saltado will be a familiar dish for diners who frequent Mexican restaurants in D.C., many of which feature the peruvian dish of grilled steak, vegetables and fries on their menus. However, I've never had a version as good as this one, served with perfectly tender steak, vegetables, ginger, soy sauce and crispy matchstick fries. It's from the "Chinese Connection" of the menu and, although adding ginger and soy may be an obvious way to add Asian flavor to a dish, it works so well here. The Aji de Galina, a chicken and pepper stew the menu declares is "Peru's most precious dish" is another homey winner augmented with fresh cheese, olives, pecans and soft-cooked eggs.

We finished our evening with an order of the Ponderaciones de Kiwicha, a spiral cookie that tasted not unlike a fortune cookie served with a wonderful dark chocolate pudding, banana slices and ice cream made from Algarrobina, a black carob syrup. The cookie was good, but the pudding and ice cream were the best parts.

The service at China Chilcano has a different vibe than that at other Andrés-run restaurants. At places like Jaleo and Oyamel, I'm used to the dishes coming out pretty fast, often together, making for a speedy sometimes almost rushed dinner. At China Chilcano, the food arrived one plate at a time, sometimes with a significant interval between dishes (and a really rather long wait for our dessert, but hey, they're still pretty new). The entire vibe of the place is just more relaxed, certainly than at Oyamel, which can feel rather manic on a busy weekend night. We were in China Chilcano on a Saturday evening, and it definitely felt more laid back, which was great.

There are a lot of reasons to love China Chilcano, from the food to the drinks to the ambiance. It even deserves a pat on the back for ending one of D.C.'s longest-running teases. After the Olsson's bookstore that formerly occupied the space closed in 2008, Wagamama, a British-owned chain of Japanese noodle bars acquired an interest in the space and put up a "coming soon" sign not once but twice since 2009, finally officially nixing its plans in 2012. Much as I do love Wagamama and had hoped it would come here, I'm more than happy that Andrés has filled the spot with an original vision that delights and satisfies has much as his other nearby establishments. ¡Salud! 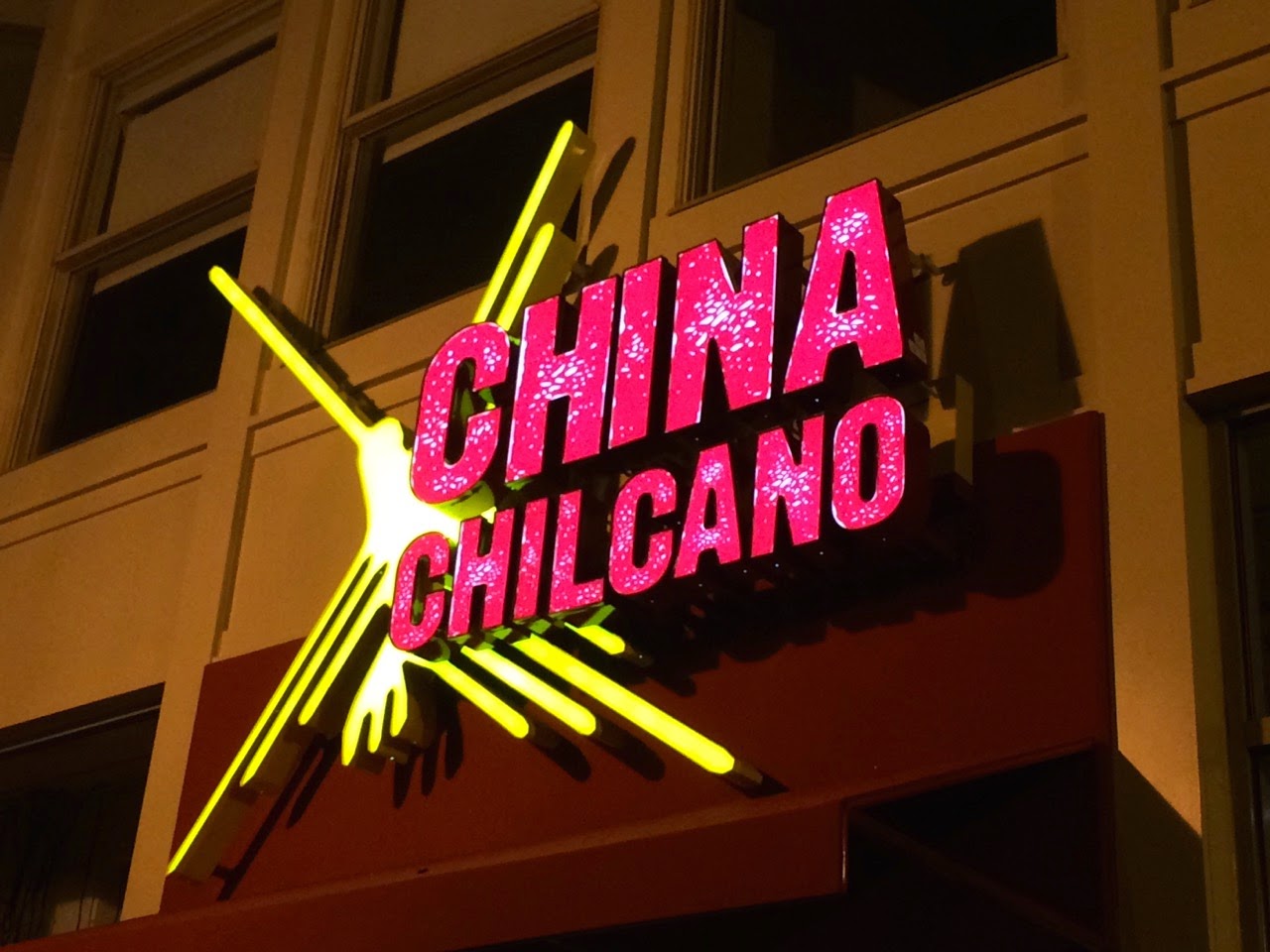