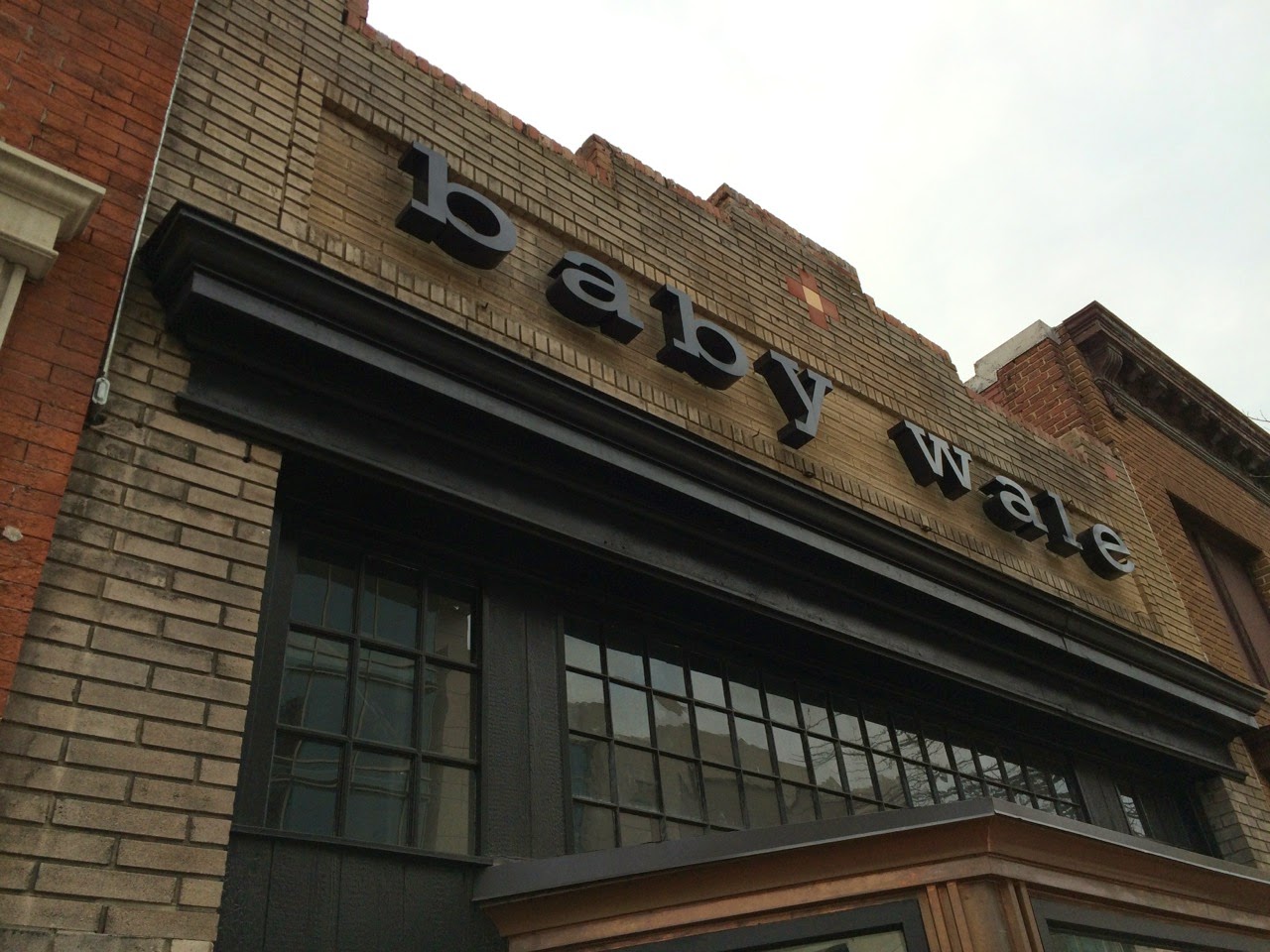 Ten years ago, we ate at Corduroy for lunch for my birthday. So I suppose it's appropriate that 10 years later we enjoyed my birthday dinner at Corduroy's casual offshoot, Baby Wale, which opened last year.

Baby Wale is right next door to Corduroy along the strip of 9th Street that lines the west side of the D.C. Convention Center. As stunning a space as Corduroy, Baby Wale is beautiful too and totally different. The restaurant itself is quite expansive, providing the benefit of tables that are given plenty of space. The wavy bar is particularly cool and rather large, running a distance of nearly half the restaurant. Plenty of happy hour patrons could be accommodated here, sipping on Baby Wale's menu of classic cocktails with modern twists like the gin rickey, D.C.'s signature drink.

Given that Baby Wale is technically a wine bar, we went with wine by the glass. The choices are interesting, although surprisingly limited for a wine bar; there were just four by-the-glass reds the night we stopped in. If you want to spring for a bottle, there's a much more extensive list, although I feel like one of the beauties of a wine bar should be ample by-the-glass selections to allow you try new and different wines.


Baby Wale's food menu is also short, but I wouldn't dare call it limited. Although just a page of offerings, the eclectic menu ranges from a dressed down New Jersey hot dog to a dressed up duck confit cassoulet. There's even a few pizzas in the mix, a handful of sandwiches and even Japanese tonkatsu.

We started the evening with a buffalo mozzarella porcupine. Although not the most exciting flavor combination, it easily wins points for a cute name and presentation: a ball of fresh mozzarella encased in crispy shreds of phyllo dough served with basil and tomato sauce. I really liked the Caesar salad which, in the vein of great Ceasars popping up all over the city, doesn't shy away from a bold anchovy dressing.

For our entree, we went with the roast chicken for two, which comes with a side of braised arugula with shallots. The ample portion of chicken was delicious: tender, juicy and flavorful. You can always tell the difference brining makes in restaurant roast chicken, which is clearly the case here. While it doesn't scale the heights of roast chicken at say Palena or Zuni Cafe in San Francisco, it's definitely a worthy bird.

Since we had birthday cake, we skipped dessert, which is also pretty limited--just chocolate custard and cookies, although the cookies coming out of the kitchen did look really good.

The service at Baby Wale was attentive, but not intrusive, which we appreciated. They also handled a billing issue well. Apparently we were overcharged and didn't realize it before we left. We got a text a few hours later about it, and a few days later the charge was adjusted down. Just as I think diners should fess up if they notice an item is left off their bill, it's nice to see that restaurants that own up to billing mistakes too.